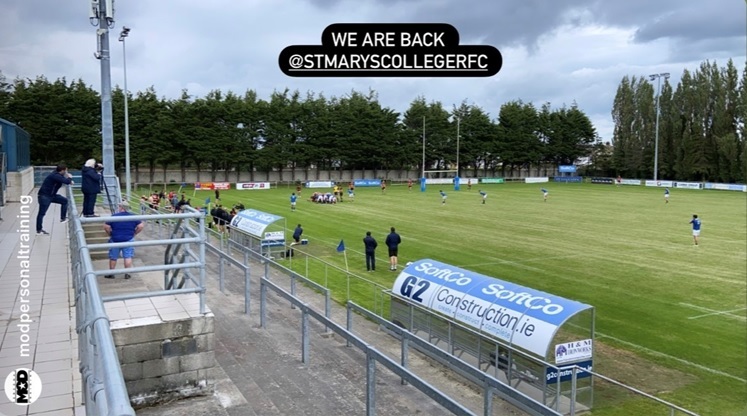 Welcome back, No doubt we have all had a funny old summer, missing many of our friends, while getting to know some even better. You will certainly be an expert on quizzes, puzzles, and of course crosswords (very). Having seen and heard every gag and joke since 1827, you are ready, when back to normal, for your first TV appearance. The problem now is recognising each other with the masks on. Hello Mike, Sorry Matilda ! But at least we realise how very important those masks are to our wellbeing. So join the Lone Ranger gang.

Now, it is a great to have club rugby back, and it is a credit to our president Vincent Cunningham and his committee. Not being up at the club we do not realise what an amount of planning and work he has been doing for the further development of the club. He has with him his fellow officers and many new and returned committee members. Vinnie is showing the same drive, appetite and acumen that his late father John showed for very many years. I know we all wish them well in this strang and challenging season ahead. The club has been operating nicely during lockdown, due to the amazing, ever diligent and dedicated, Club Administrator Marie Hammond. Thank you all.

♫A rugby club we are by name; and rugby football playing is our game. ♫

We owe an enormous amount to Steve Hennessy who has, with his friend and the director of rugby Alan Shirley, worked day and night, non-stop, since the interruption in March, to keep the squad together, add to it, and make preparations for fulfilling Covid conditions, so we could be back now doing just that, playing. Steve, a widely and highly regarded coach, is a remarkable man, who has stepped in on a number of occasions when needed to rescue and drive forward rugby in our club. He, fellow coaches, Jamie and Mark, and squad management have the players in good shape and ready to go.

Behind the scenes for the past number of years Alan has been assiduously working with Rugby Council, Paudge, Quinner, Kevin and Stephen Shirley, to streamline all our rugby structures so as to deliver to the highest possible levels.

Well they got us here today, thank you all involved. Needless to say no spectators are allowed to attend the club, so on your behalf, I will attempt to give you an idea of progress with reports of games, from the start of the Leinster Senior League and later the AIL. I hope you will feel free to interact and let me have any positive suggestions or indeed comments.

Next week we have a cup, (LSC) game V UCD, then we go on to LSL and after Christmas AIL. Mark Sexton has been brought in by Steve to help coach the backs, as a replacement for Barry Lynn, who has to step back due to domestic demands. Barry should be thanked greatly as he made a notable contribution, and he will we hope, return to coaching and the club in the future. Mark has developed into a particularly well regarded backs coach and has been involved in the recent impressive development of St Mary’s College sides. He has of course won an AIL medal with the club in 2012-13 (see the Ballad of the AIL on club archive website HERE) and coached the club U20s. Everyone will wish him enjoyment and success.

Well let me say that today was a refreshing and enjoyable exercise which was not only enjoyable to watch, but clearly also for the players to play in.

This was club captain, Richard Halpin’s first game as skipper. He is a very fine, talented and dedicated player, a natural leader, an exceptionally popular and affable young man. He feels the honour of leading his club, deeply and is pre-eminently suited to navigating what will be at least an unusual and difficult season.

Yes there were mistakes, missed passes, dropped balls and missed tackles; odd lineout mishaps; and other errors. On the other hand, there was adventure, some lovely vectors or running lines, hard drives, fine covering and organisation. It was a credit to both sets of players. Both clubs were short but be not mistaken, St Marys deserved the victory and can feel proud of their performance. It is always good to beat Lansdowne. You can see below the squad and will note many notable absentees, but there is no long injury list and all will be back. The pack was all endeavour and showed good levels of fitness and cohesion. Liam Corcoran enjoyed a fine stint with excellent lineout work and free running loose play, where he showed his pace with a neat try. Props, Niall McEniff and Podge worked effectively and scrummaged hard. The high quality back row, showed that quality with Ronan Watters leading the way. The backs were full of running and it was good to see that, even without several better known players. The alignment and understanding were good and the results of all the hard work of the squad and the coaches were there to seen. It augurs well and having several games now against 1A opposition can only be good for all these young players.

Being a friendly game, it was organised in thirds and there was free rotation of players, which gave everyone a chance to get game time. After the first segment, the home side led 14-12. Ruairi Shields alertly took a good intercept, and David Aspil, who is a key player, drove over and Ruairi converted both, Lansdowne converted one of their two tries. In the next segment Lansdowne got a converted try after some weak tackling, while Liam Corcoran intercepted and ran in a try from 30 M. to leave it 21 -19. It was good to see that the pace of the game, from the start did not drop and in the final segment there were some exciting phases. Marys got a penalty which was kicked to Carvill corner and after a good take and drive, Stephen O’Brien, looking very trim, broke and drove over. A good conversion made the score 26-19 and a penalty soon afterwards brought it to 29-19. In the closing stages another lineout take, this time in the Gate Corner, with a short maul, then big David Aspil broke to score his second try. It ended 34-19. A good day at the office, after all the working from home.

A touch of Nostalgia

Looking below at the match day squad, some interesting names appear; none more so than that of Dylan Jameson. All of you who went through the 90s as players or supporters, when AIL was king and Munster teams were filled feisty fire will feel a jolt of pride at that name. The rivalry then was boiling and rucks and breakdowns were not for the faint of heart. Many another team crumbled at the Killing Fields or Thomond Park. When you had a Steve Jameson and his partner, Kevin Potts, you never crumbled. Steve was to rugby, Tyrannosaurus rex, he loved his club and revelled in the robust rumbles of AIL. A colossus, he never started trouble and was ever fair, never foul, but he was indomitable. He never took a backward inch. He was one of our true greats. His real quality can be gauged when still today, the Munster clubs speak with respect and affection for Jemmo. Well, his son Dylan, although only 19 years old is 6’ 7”, a really big man, he is also a very nice young man. He obviously has great potential and he is most welcome to St Mary’s College RFC. It shows his dad’s affection for his old club and his special friendship with his old colleague and friend Steve Hennessy, that he nudged his son from the other side of the world, where he is now based to Templeville Road. Welcome Dylan.

We will have another chat soon. Meanwhile please do stay safe. It is so easy to forget.

All the details here: https://bit.ly/3vcmlzL