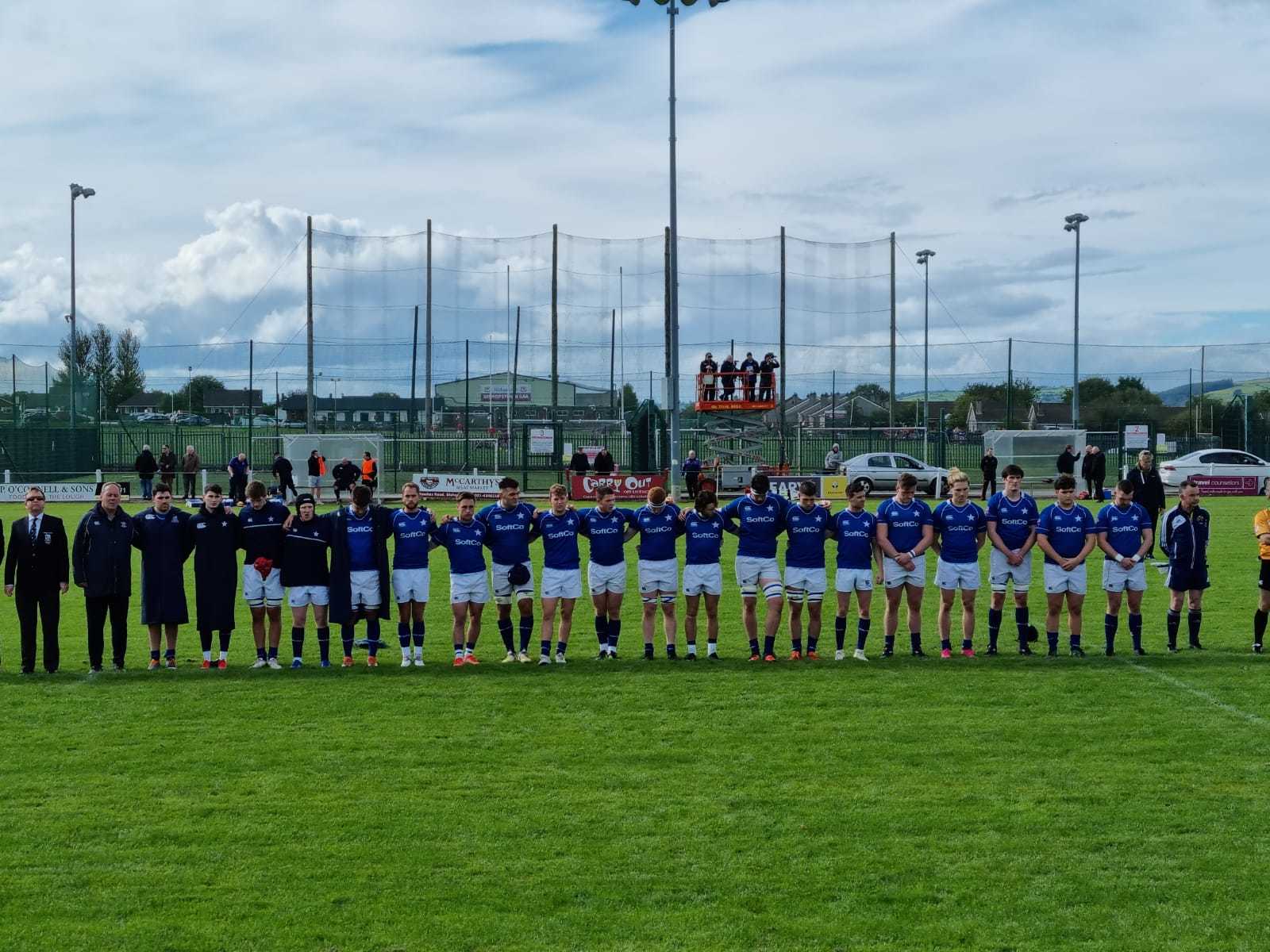 No High-Fives at Highfield, but a bonus for birthday boy and captain, Richard Halpin!  Even though we did not get four points, the long trip down was well worth it, as the game was a high tempo highly competitive one that could have gone either way.

To get back to AIL, felt somehow uplifting and exciting. It was good also to see many of the ever loyal supporters who made the journey. Some of those I saw, included, Spike and Declan Fanning, Louis McMullan, Robert (Time Warp) McDonnell, Tony (Stoney) Burke-Moran, Kevin Conboy and John (Pyner) Pyne, with flag; and Mick (The Medium) O’Connor. To add to that, the weather and conditions were perfect.

It has to be recalled that Highfield was the preeminent club in the last AIL 1B campaign. The home side made fewer errors and that was probably the deciding factor. The game was, exciting fast and of a high standard.  Those errors from both sides were to be expected in the first AIL game of the season.  St Marys had more opportunities to win in fact, and were unfortunate, twice in particular.  Once they were held up over the line and the new laws frustrated them, for instead of an attacking scrum, an area that at the time, was being comprehensively controlled by the visitors, it was a drop out from the goal line. Late in the game, when we were four points behind, we won three penalties from attacking scrums on the line and the fourth time the scrum spun clockwise, when it well might have led to a further severe penalisation, Adam McEvoy, who had a fine game, had to play it out wide; we lost the ball in that attack, near the line, and so the game.

The lineout had some mishaps during the game and will need more work, the scrum, with highly regarded, Mick McCormack back from Leinster duty, was, with a couple of slip ups, dominant and a strong asset in attack and defence.  The backs all worked well together, with talented, Conor Dean, making space with superb passes and controlling things and the midfield looking potent.  Mick O’Gara took up the ball effectively and frequently made good ground, his defence too, was brave, strong and secure and with his high tempo work rate, deserved the SoftCo MoM award.  Against a big pack, our eight did very well, and in the loose, worked hard.  There were dropped balls and general errors, but as the season progresses that ball security will tighten and offloads will speed up. Nick (Warrior) McCarthy came on in the second half and was most energetic and impressive, both in his own game and as an added leader. Having the superb Ronan Watters back in the near future, will strengthen further a competitive and courageous pack, led by inimitable, skipper Richard Halpin.

Steven Hennessy and his colleagues will be disappointed, as this could have been a win.  It is those final touches that make the difference, but they will have seen much to be optimistic about. Already young players coming up from the junior and under aged teams are showing their ability to fit in and play at the required level. It is the depth of a squad that ultimately decides its fate.  It is looking good.

The game took off at pace, and after seven minutes when pressing hard, we were awarded a penalty which Conor Dean dispatched with aplomb, 0-3.

Then on 11 minutes we got a yellow card for a non-wrap tackle, and they kicked to the corner, set up a maul and made good use of their advantage to maul strongly, then when the ball was moved wide, a slick switch of direction beat the tackle and Highfield went 7-3 ahead.

A break and kick ahead by in form winger Craig Kennedy, on 29th minute, saw the ball into touch deep in home side’s 22 and a lineout infringement gave Marys a penalty, a scrum was the brave but wise choice and the scrum went marching towards the line, then Niall Hurley broke deftly from the back and dived over.  Conor converted 7-10.

It was 37 minutes when a kick to the corner for the home side led to their strong maul being deployed, then a series of pick and drives, and it was 14-10.  That was the half time score.

Fortunes swayed in the second half with both sides moving the ball well.  Marys increased the tempo of the game and went hunting for a score, and on 62 minutes we were rewarded when we emulated the Highfield play in the first half, by using a lineout to set up picks and drives which ended with Conor Corcoran forcing himself through the melee and over close in, Conor converted and it was looking good. 14-17.

Unfortunately for the visiting side, Highfield, yet again repeated the performance of lineout, maul,  try, conversion. 21-17.

That was the end of the scoring, in spite of that afore mentioned assault on the Highfield line with brilliant scrummaging.

Next week we entertain Old Wesley, who beat Shannon 23-22 at home.  They will present a difficult test, but one which we can pass.  Having the situation now that we can have supporters present is a real advantage, remember how you missed being able to be at games and meet up and chat, and have drink afterwards, and so on.  Don’t forget that now.  You must come along and help your team.

The use of YouTube and such platforms during the pandemic was very welcome; perfect for emergencies.  However, it could kill club rugby and maim clubs, if it remains the norm.  Cold winter afternoons, how many will get up and out of a warm house to come and watch their club? It could cause serious difficulties for clubs, including ours.

So up on your hind legs next Saturday, and come up and start “Halpin” Richie and his team, they need you.