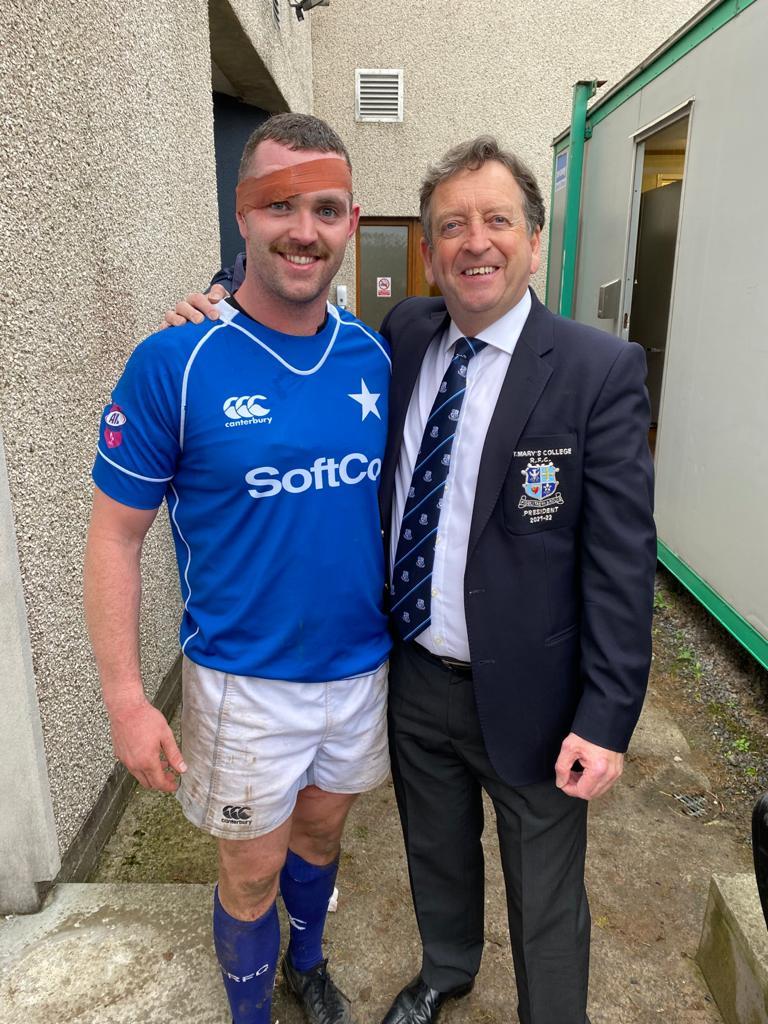 Published: about 2 months ago

Energia AIL Division I B

It all looks all so easy, five points in the safe, and an emphatic winning margin. Oh no, not so easy. This was a game with everything; excitement, skills, errors, swings, injuries and even near heart attacks, when the home side got from 7 - 24 to 17 - 24 while the visitors were still facing five minutes with two players in the sin bin, and their line being assailed. Well this is when the boys became men……………

It could not have started with a worse nor better start. From the very first play, inspirational Nick McCarthy, was left on the ground after taking a ball into contact, only to be supported off with a serious knee injury. After a hold up of five minutes, and the very next play, a brilliant backline move, ended with a try in the corner by Matt Timmons. Everyone will be hoping, like with Hugo last week, Nick makes a speedy, uneventful recovery and is soon back to his jousting best.

It was an exhilarating game, and overall St Marys did look a better side than their hosts, in spite of losing their great Warrior at the start, and in-from winger Craig Kennedy, during the first half with an accidental elbow in the eye.

With two forward led and three backs led tries, it was a balanced performance with many players distinguishing themselves. The forwards can take great credit from their never flagging efforts, with good quality lineout ball, a strong scrum and fine rucking and mauling. One man excelled in each of those efforts and that was Mick McCormack. He was superb here today, his presence in the tight was a vital factor, especially his scrummaging, which was indomitable. He carried like a backrower and never let a man by, as he fortified the line in defence. The outstanding forward.

In a backline that sparkled right across, with newcomer Aaron O’Neill impressing, there was one constant involved in every move of importance in attack and defence. That was Myles Carey. He was a thorn in the side of Banbridge, he looked like a swashbuckling adventurer of old.as he lanced through or cut down attackers. His distribution today was also excellent, his running balanced and assured and his animated performance was inspirational to all around him; his quality shone through. He was deservedly awarded the SoftCo MoM Award.

Banbridge put up stern resistance, yet their performance was somewhat erratic and for the first quarter, lacking in organisation. Later in the match, they raised the pace and quality of their game and came near to overhauling Marys, mid second half. No doubt when they visit us they will be back to their most creditable best. As ever their hospitality to our club was exceptionally warm sincere.

This period is allowing Steven et al. introduce young developing players and all have responded commendably. This is very important to the continuity and ensuing excellence. Mark Fogarty an impressive fullback and winger had a very comfortable game at 9 today and the young back five players all did really well. A special well done U20 Daniel Leane, who showed his potential. The valuable and now seasoned, second row Liam Corcoran, who once again had a notable afternoon, is only 23. Well done to all.

What was still the first phase of play in the game, a scrum near halfway, following Nick’s departure, saw the ball moved rapidly left to right. Rhuairi Shields came in extra and gave a delightful one handed off load to make space for Craig zipping across from the left wing. Craig to Myles, who made more ground and space and he flicked it on to Matt Timmons who held his position and the ball very well, before grounding in the corner. A delicious little amuse-gueule.

On ten minutes, after some pressure from the visitors, the home side had a defensive lineout near their line. In what appeared to be a rather over adventurous decision, a back of the lineout throw, was over-done and ever alert skipper Richie, who was fairly humming won the loose ball and went through two defenders to score, with Conor converting, it was 0-12. Self-pinching time!

It was 26 minutes, when we had a scrum inside our own half and Niall Hurley, now at 8, made a half break and Mark Fogarty fairly flew through and linked with Matt Timmons, who showed pace and balance and when at the 22 he switched back to Mark who had stayed up, and had the strength and pace to beat the defence to the line. Another fine try, 0-17.

Three minutes later, Ban launched a hard attack with multiple carries and when stopped near the line they ran it wide and scored in the corner and converted. 7-17

On 32 minutes, Marys had a lineout five metres out, and when a maul was taken down going over the ref awarded a penalty try, 7-24. The bonus point try.

That was the score at half time.

The second half saw Ban raise their game emphatically and soon both sides are at it zip and zap. Frantic at times, we started coming under considerable pressure. Just past the hour, they scored a deserved try. President Patrick, and his wife Joan, circled the pitch continuously, as the nerves grew.

We then found ourselves with two men in the bin and Niall Hurley down injured. Then, an enormous bombardment of our line commenced. Only one score behind and we with 13 men. It was a real test of our nerve and belief. The side line shivered with fear, the men on the field rolled up their sleeves and down their socks. Line after line of carriers came, they crashed against our defences, like an Atlantic storm. They came in Baltic waves and we held. Our young tyros stood together unwavering. But it had break it seemed inevitable, the dam must burst. Then after close in, hand to hand combat, point of attack moved, the ball hurtled out through hands towards the wide spaces where only two defenders waited and four attackers swept forward. No one can explain how young exhausted men, sucked 02 and flailed their legs and hauled the carriers down. A miraculous escape. Whew!!

There was still a battle, but now we were back to 15 and ready for action. With three minutes to go a crooked lineout throw gave us a scrum and we worked the ball across field, a ruck formed, the exemplary Mick McCormack once more ploughed through the defence with Ian Wickham in support, they put the ball back and Mark fed the calm conductor, Conor, who held on to a ball at his toes, swung it out to Mattie on the wing. He was not going to be stopped. 17-29. that was how the game finished.

What more can I say a most important five points. We now, with seven are sixth on the table, level with Shannon. We have no AIL game this week, but an important J1 game on Thursday which you must support. Then the following Saturday we entertain City of Armagh, who lie third, behind Highfield and Old Wesley. Armagh have beaten Banbridge, Old Belvedere and Shannon, so tough opposition. We hope to have some of our wounded men back.

Don’t forget Saturday 30th October you must come and give Richard a Halpin hand.

PS. It was a wonderful occasion on Sunday, when two U20 teams from St Marys and Terenure, battled it out in a very close and highly entertaining match, for the new Banana Cup, in commemoration of the most popular Pioneer of our Club, the recently and very sadly departed Joe Fanagan, captain of our first ever LSC winning team in 1958. With all of his family present, it was fitting occasion. Congratulations to the St Marys team that prevailed and wonderful to see so many of the players of both teams with close ties to former players from both clubs.