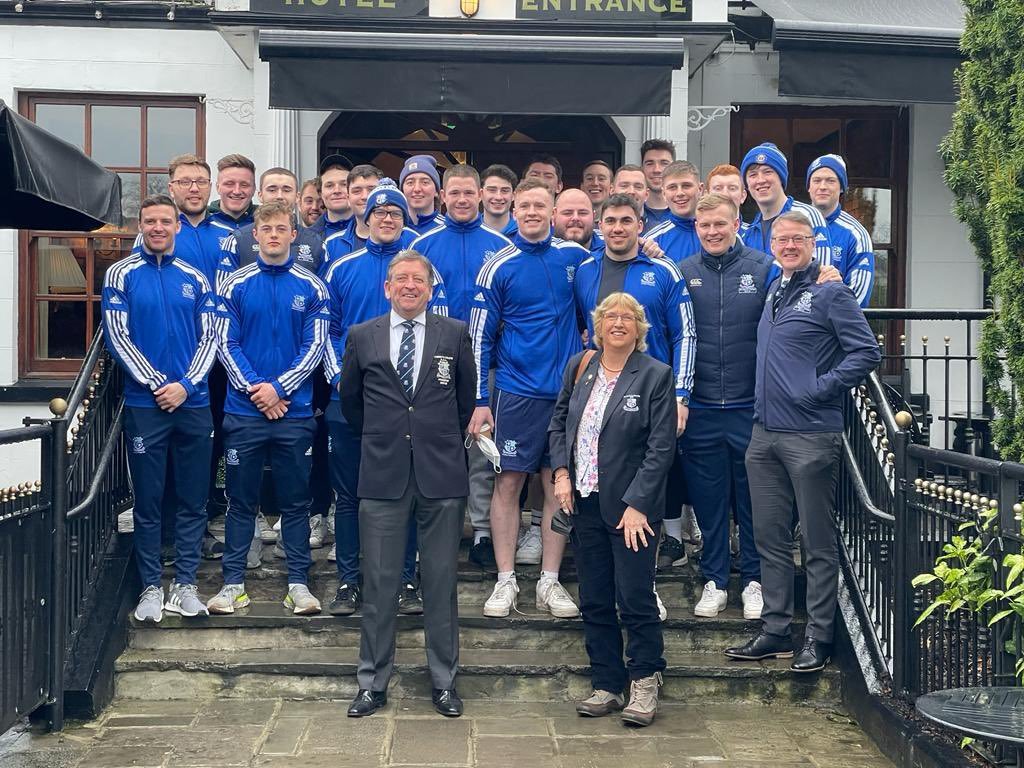 Overall
Well, it shows our games with Malone have real draw. It is always good to visit Gibson Park, even if our previous two visits, were in almost flood conditions. This time the weather was more benign and the welcome as warm as ever. Our pre-Christmas meeting in Templeville Road was a sparkling 42-42 draw, when Malone made a dramatic comeback to earn a draw. This time we made the comeback, if from a less propitious situation for the home team.

Whatever, isn’t it just uplifting to be back to exuberant youthful and energetic excesses; from Covid controlling Christmas inertia? We can now see the shimmers of spring sunlight and warmth of fellowship. Rugby gives hope and unconditional friendships; and club rugby lifelong ones. Let us harvest each smile and cherish each joy as we again nurture normalcy, ready to form the new zeitgeist.

Each person who went to the trouble to make the trip was important to the players and the coaches and we saw many, stalwarts like Kevin Conboy, Spike, Pyner, Vinny Murray and parents like the Halpins, Careys, Kennedys, McCarthys and the McCormacks. It was particularly good to see former senior player and member, Henry Cleary, who settled in Belfast 28 years ago and still hasn’t forgotten his old club.

Reality
To earn a draw away from home is a commendable achievement and we should celebrate it. The quality of the current squad that Steve and colleagues has assembled is high and so we expect much from them. The spirit that got us home in Shannon and yesterday back for a creditable draw, embodies that spirit and belief. It will stand us in good stead on the journey ahead.

We had some notable returnees from injury. The skipper Richie Halpin was back and showed his value, as he got his lineouts right, his defence was solid, scrummaging strong and his leadership clear. He scored a vital try. The great warrior Nick McCarthy was also back, but unfortunately, just as he started to show his influence all round and in the lineout, he got another injury, poor lad. Liam Corcoran, who is now a very fine second row and vital team man, he was a most welcome returnee. David Fanagan was back too, and showed his determined attitude and especially in the second half his brilliant ability, with terpsichorean breaks and links. Another back from injury was loosehead Niall McEniff, he came on for an impressive second half of strong scrummaging. Also back was Craig Kennedy, a cerebral player, who showed his Kennedy footballing talents and his bravery. He had a notable first half and then, combining with peerless Ronan Watters, scored a memorable last minute try to draw the game. Two young men for the future showed excellent promise when getting considerable chunks of game time. Both are talented players with strong potential. Daniel Leane at second row and Tim McMahon a schoolboy star centre, will be very happy with their contributions. Well done lads.

Last game our backs were sharp and coruscating, today they lacked that sparkle, just a little rusty. Our halfbacks however, were impressive with Conor Dean in fine form. His passing as ever, was outstanding, his decision making and leadership acute and his off-tee kicking was match winning. He is really a vital part of this team. His partnership with returning Colm Reilly is burgeoning. Colm brings zing pace to the game. That match will have brought him back to his top form for the next.

For long parts of the game the pack had to strive with every fibre to match the big and hard Malone Eight, but they never gave in and with our scrum always in contention and in the second half clearly dominant, they can be very proud of their supreme effort. It was the Marys scrum that was pivotal in our recovery and ultimately the draw. In scrum lore it is clear that the front row plays a lead; today each of them did. For the entire 80 minutes, Michael McCormack was totemic, he never wilted, carrying, blocking, lifting, tackling and most of all scrummaging in demonic fashion, to help win several penalties, position and possession. If not quite up to the International Furlong, he certainly is 200,000 metres; and on his way. He was accorded the SoftCo MoM Award.

The Game
It was an unusual game in that its complexion changed several times during the game. One thing was clear that Marys wanted and needed to play with high tempo and intensity, while Malone wished to slow to the pace of their big pack. They have developed a system of slowing the game, with little stoppages for attention or changes or checks.
For the first twenty minutes or so, Malone had control and Marys were under pressure, before Malone broke the nil, with a lineout in the corner, a strong maul, then, a runner coming in at a hard vector and scoring, to make it 5-0. Then we came into the game. We moved the ball at pace and started getting position. Having made it 5-3 with a well struck Deano penalty, we pushed for a try, the last ten minutes of the half we attacked the home line and were unfortunate not to score; one call being noticeably harsh. However the half ended 5-3. And being honest we may have been a little fortunate to be in that position.

The second half was similar to the first in so much that the home side were in charge of the early part, with the visitors coming back near the end. In fact early in the half, a missed tackle let them in for a try under the posts to make it 12-3 and soon afterwards, on 52 minutes, a very well worked move, initiated by fullback Aaron Sexton, led to an very fine try (if you were a Malone fan) and made the score 17-3. Blue supporters were now looking grim. Marys then got to work and started getting pace on the game and putting on pressure. We were fortunate to be blown for not releasing on the Malone line, but soon afterwards on 72 minutes after a lineout on the five metre line, a maul was formed and we made good progress, then with a second squeeze, over we went with Skipper Richie deservedly clamping down the ball. Conor Dean converted a very difficult kick. We had optimism now, the score being 17-10 and in losing bonus point range.

The rhythm was starting to show. The next five minutes we were in heavy attack mode. It was 79 minutes, when David Fanagan ran back a clearance, a ruck gave the ball back to Deano, who swept the ball out near the halfway to rampaging Ronan (close to touch). He beat a tackle and made ten metres, fixed a defender and timed his pass elegantly to Craig with 30 metres to go. Craig hit the turbo and went, he swayed past a defender, left another behind, he kept his line, as he fairly zipped in. Once again he knew his business and when he was over, he went in fifteen or so metres, to make a conversion a little easier. It was still a tough conversion to make. Deano showed nerves of titanium, as he struck it true. 17-17. Final score.

The pleasurable relief and pride were clear on the faces of, DoR Shirley, coaches, Hennessy and Cronin, managers McGill and Moran. President Crawford and VP Roche, along with Hon Sec Ms O’Donnell and Hon Treas Manning were all in relief and sigh mode. Good to see that the president was still able to stand after the tension.

We are now fourth on the league table, having dropped one place, with Naas who gained a bonus point win on the weekend, swapping places with us; so we are one point behind them. Ironically it is Naas who come to play us next weekend. They of course beat us at Forenaughts before Christmas. It will be A tough. No doubt you all missed the games when they were not available. Now show your appreciation by turning up in enormous numbers next Saturday. Flood the grounds with supporters, get on the terrace and let us hear Marys-Marys-Marys! loudest ever and more frequently than ever. Come on, just make the effort; this is a challenge to you. Don’t find excuses. You are assured of fair weather, a good match with even one on the terraces, as Naas who are most welcome, bring very large numbers of their supporters. Make it a good natured banter and cheering competition. This will be a very important match for us.

May I wish you all a very trouble and Covid free, new year. I hope that all of you will be able to enjoy freely the club facilities and have a successful year in all respects.
Thank you for bothering to read my thoughts on the games, which will always be honest even if not in line with everyone else’s views. Feel free to comment or disagree.

As per our email sent last week, please see below notice ...

This Friday evening, May 20th, sees our annual 'Youth Rug...